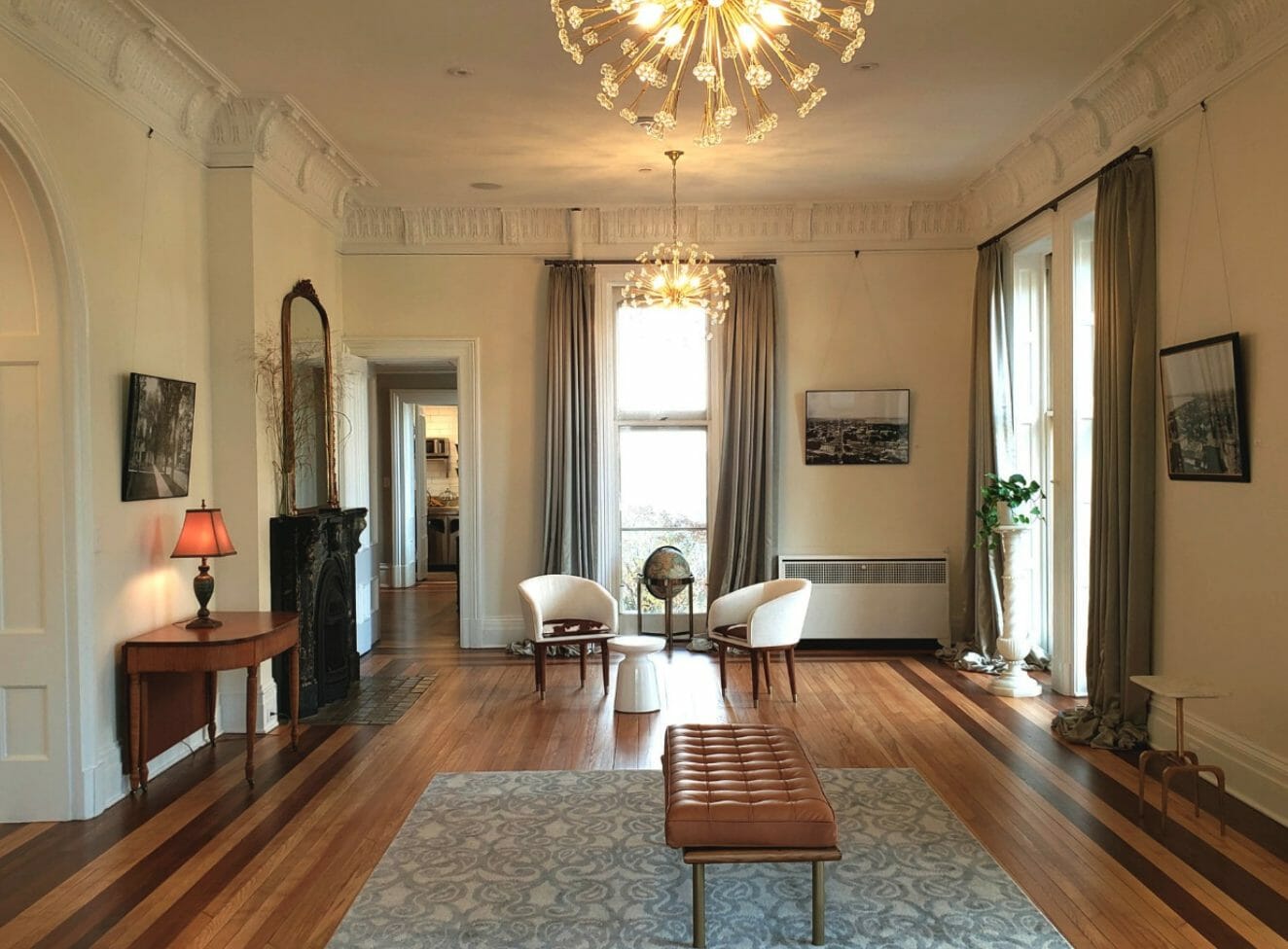 TDS Custom Construction recently received the Madison Trust for Historic Preservation’s 2020 Award for Exceptional Interior Preservation for our restoration work on the Governor’s Mansion Inn and Café. Turning Madison’s original governor’s mansion into a charming bed and breakfast with modern amenities, while preserving historical details, was an epic undertaking that yielded stunning results. This restoration project was especially exciting to be a part of because the 150-year-old building has been such a unique and important part of Wisconsin’s history. It’s a history of governors and lumber barons, a world-renowned violinist, and an experimental intellectual community for graduate students. When the mansion’s new owners, David Waugh and Bob Klebba, approached us with the project, we were thrilled to take on the challenge. The project entailed some essential upgrades, a lot of restoration work, and remodeling to convert the mansion into an inn. The result? A remarkable feat in historic preservation, and a breath of new life for a well-loved piece of Madison history.

Transforming historic mansions into an inn has become a common way of preserving buildings—but the history of the Governor’s Mansion Inn and Café makes it particularly unique to Wisconsin. From 1885 to 1950, it housed sixteen of Wisconsin’s governors, among them “Fightin’ Bob” La Follette. The rich history doesn’t stop there—the University of Wisconsin purchased the property in the 1950s, turning it into an experiment in interdisciplinary communal living called The Knapp House. There, UW-Madison graduate students from different disciplines were invited to work and live in the Knapp House during their final year of dissertation.

Even earlier than that, the renowned Norwegian violinist Ole Bull moved into the mansion in 1870 after marrying lumber baron J.G. Thorp’s 20-year-old daughter, Sarah. After current owners Waugh and Klebba bought the mansion, an Ole Bull scholar named Peter Sheppard Skaerved traveled from London to play one of Bull’s old violins in the mansion. “The house resonates with music,” Klebba said of the special performance. “This is before recorded music, and the only way people could remember him was by a live performance.”

The property was placed on the National Register of Historic Places in 1973, designated in 1974 as a city landmark, and in 1989 was inducted into the State Register of Historic Places. The original brown sandstone bricks were quarried in the town of Westport across Lake Mendota, and the house maintains the distinctive Victorian architectural features with Italianate influences that are common in some of the earliest homes in the Mansion Hill District.

Bob Klebba and David Waugh bought the property in 2017 and contracted us to convert it to an eight-room hotel and café. Restoring a 150-year-old house comes with unique challenges. Work was needed to bring the building up to code and address some structural concerns.

For starters, a second-floor bathroom installed in the 1920s had compromised the second story floor structure. We solved this problem with a modularly constructed steel-beam superstructure installed in the attic to hold up the reception room ceiling. We also upgraded the electrical distribution because when we opened up the walls and ceilings, we discovered there was too much knob and tube wiring. Upgraded plumbing, new air conditioning, a sprinkler system for fire protection, and more insulation were all part of getting the building restored and up to code.

Beyond the basics, some specific remodeling work was needed to turn the house into an eight-unit inn. We added bathrooms to each of the rooms and converted many of the mansion’s fireplaces to natural gas. We also upgraded accessibility for the building—making the west side entrance to the inn accessible and widening the doors throughout the interior. We remodeled the kitchen and created additional parking spaces for hotel guests. We also did a lot of work to restore the mansion’s beautiful wooden floors.

The new design elements give the mansion a modern, updated feel while respecting the original architecture and history of this grand house at 130 E Gilman Street. Many of the architectural features in the building preserve the look and feel of the original 1850s building, from the sandstone exteriors to the long, recessed windows and sweeping staircase. The updates have been very carefully designed and located, so they do not distract from this feel.

One of the great satisfactions of completing the rehabilitation is knowing that new plumbing, new electrical system, new air conditioning, new sprinkler system, new fire alarm system, new accessibility features not only bring the building up to current building code but will also carry the building 50 years into the future. Happily, there are many architectural features in the building that preserve the look and feel of the original 1850s building, and the updates have been very carefully designed and located not to distract from this feel.

Interior design was one area where old and new complement each other in the latest iteration of the Governor’s Mansion. The new owners selected a mix of new, mid-century modern, Art Deco, and Victorian furnishings, fixtures, and artwork for use in both the public spaces and guest rooms that tastefully create an updated, clean, and historically minded look and feel.

The project manager’s meticulous attention to the unusual details required for historic preservation allowed the rehabilitation to proceed relatively uninterrupted and to finish on budget.

The Governor’s Mansion Inn and Café was a satisfying project to be a part of, because of how the project has extended the life and vibrancy of such a historic place. The conversion of the mansion into a hotel respects the history, space, and feel of the grand house at 130 East Gilman Street. We’re happy that we were able to help keep this vital part of Madison’s history open and available to the public.

Everything You Need to Know About Renovating Your Primary Bathroom

Made in Wisco by Dirigible