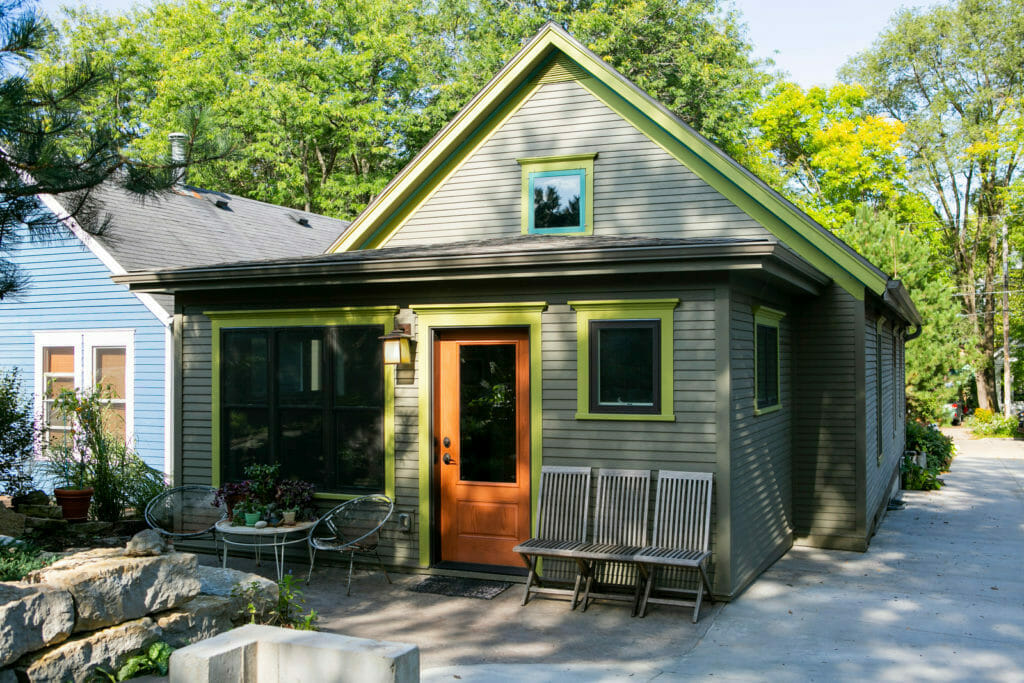 From “Diamond in the Rough” to “Forever Home”

When we were asked to perform some interior improvements on this single story, 1,000 square foot workingman’s bungalow in Madison’s Marquette neighborhood, what we found was a diamond in the rough. The five foot tall basement had an old cistern with a dirt floor, and was extremely wet. The floor joists were rotting, plaster was falling off ceiling and walls, and the bathroom and kitchen were both very tiny—falling almost completely apart. We restored the home with an open floor plan and two bedrooms to be energy efficient, very comfortable, and smartly designed, and we rebuilt the existing rear “addition” as a combination entryway and sitting room with new stairs to the basement. The result? This eastside bungalow got a much needed overhaul!

This home was purchased with the dream of becoming our client’s forever home going into their retirement years. The home was one of three homes built together by the same builder with nearly identical designs—originally home to local railroad workers. Over the years, the house suffered from neglect and needed a thorough renovation.

Originally, the owner had hoped to work with the existing rear addition due to budget constraints. As more accurate costs were assessed we quickly realized that it would be more cost effective to demolish the old structure and rebuild because of a poor layout and the lack of an HVAC system. With the new plan we’d be able to provide the owner with a much more usable space and a much greater value for the overall investment.

The basement was completely wet and moldy. We removed the existing concrete along with eight feet of soil, and replaced them with a granular substrate and new concrete floor. We installed a complete drain tile system and a dimple mat on perimeter walls in order to drain any bulk  water coming through the walls directly into the drain system. A two-part urethane insulation was sprayed over the mat to further protect from any future water damage. All of the sub-slab plumbing as well as all mechanical systems were replaced with energy efficient units. Many rotten floor joists had to be sistered with new dimensional lumber on a new pressure treated mudsill.

Better Liveability on the Main Floor

The first floor was completely renovated with a new kitchen and expanded full bathroom. We installed new hardwood maple flooring throughout, along with new paint grade trim to match the existing profiles. We brought the laundry units up from the basement to the first floor. We constructed the new addition at the rear to be complementary to the original house design.

The existing “full” bathroom off the dining room was cramped and in dysfunctional condition—we expanded it in length toward the kitchen approximately two feet, to allow for a 54 inch tub/shower and code compliant spacings throughout. Tile, wainscotting, and shower surround with a new window and door completed the look, resulting in a warm and functional full bathroom.

In the kitchen, birch cabinets, with butternut stain by Woodhabor, and quartz countertops lend a rich contrast to the light maple floors. The owner was able to keep their existing dining room table rotated 90 degrees, even after a slight expansion of the kitchen from one end and the bathroom from the other. The rear window to the right of the exterior door remained in place in the finished kitchen.

An old closet with a narrow opening and window  was transformed into an extension of the living room, complete with a wider cased opening that captures lovely natural sunlight, giving the impression that the living room is larger than it is. We maintained the storage functionality by framing in a small closet at one end of the narrow space, tucked away out of sight.

A non-original addition to the home was demolished, and a new addition with access to the basement was constructed. The existing stairs to the basement had an extremely low head height, so we reconstructed them to be code compliant. A half wall that hides the stairs allows for substantial natural light to brighten the new sitting room, laundry closet, and rear entryway.

With the new traditional maple floors, plaster, period trim, and a fresh coat of paint throughout, the open floor plan of this two bedroom home is very cozy on winter evenings. With a little creativity, smart design, and building toward energy efficiency, we were able to give this diamond in the rough some new shine—and we’re proud of the end result.

A New Blueprint at TDS

Made in Wisco by Dirigible